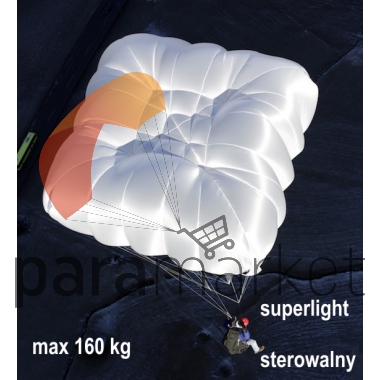 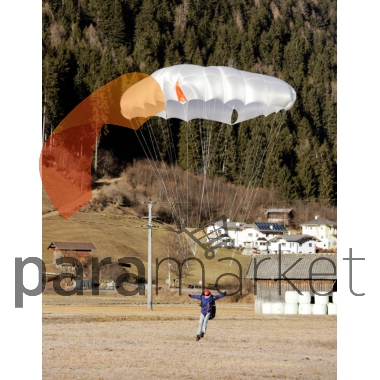 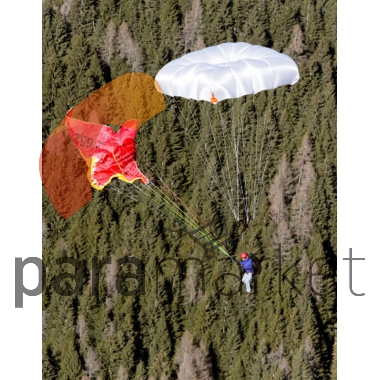 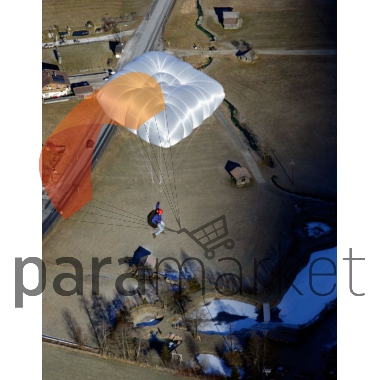 1. It has a defined forward speed in diagonal direction with the effect of a significantly reduced sink speed. This results on the one hand in a higher aspect ratio compared to conventional cruciform canopies, those propulsion mainly takes place towards one side, and on the other hand in the asymmetrical air flow of the convex sides of the DIAMONDcross canopy, thereby receiving an ascending forced optimised profile.

2. The horizontal movement which is typical for every modern round canopy and cruciform canopy, can be steered for the DIAMONDcross ST in a certain direction, if required. Obstacles like e.g. power lines can thus be avoided and an emergency landing field can be precisely approached with a glide ratio of ca. 1:1,5. There are no disadvantages for the DIAMONDcross ST compared with conventional cruciform canopies.

3. The DIAMONDcross has different line lengths which has the effect that the strips of the canopy don't lie on top of each other when packing the canopy. This diversification causes an easier air inlet when opening and thus an increased opening speed compared to conventional cruciform canopies. The packing of the DIAMONDcross is not more time-consuming or more complex than for a normal cruciform canopy.

The concept of the DIAMONDcross works without pre-brake and therefore the system remains very easy to handle and is reliable.

There are no potential hazards in consequence of the steer-ability: The twisting of the lines, which often is unavoidable when using a controllable rescue system, doesn't cause any special risks. The DIAMONDcross can also be controlled in twisted condition. The red colour marking on the front head indicates clearly visible the flight direction for the pilot.
No risks can arise by excessive pulling or by non-use of the brake handles. There is no risk of stall. A pulling of the brakes is not required when landing, as the canopy already is trimmed at minimum sink rate. The forward speed also reduces significantly the risk of spine compression during the landing.
The long suspension lines of the DIAMONDcross and the symmetric shape of the canopy lower the risk of causing a collapse with the rescue system and the glider.
Forward movement and low sink rate reduce in addition the risk of a side slip between the rescue system and the glider, and therefore higher sink rates.
A short stall phase of the DIAMONDcross after opening prevents the formation of a „downplane"-position. The DIAMONDcross merges without the help of the pilot after a short independent stall phase in an easy, very stable and swing-free forward flight.
The special design of the inner container, optimized with the help of Tom Grabner's G-Force trainer ensures a safe deployment of the DIAMONDcross with low effort needed. Especially with regard to inconvenient pulling directions when deploying the rescue system. Therefore we absolutely recommend to use the original approved container with the rescue system and to adapt the rescue handle of the harness to the container by an authorised service company.
The inner container has a separate space for the suspension lines.
The canopy will only be deployed after aspect ratio of the suspension lines, which enables a fast and controlled opening. The risk of a cravat of rescue system and glider is therefore reduced.
The superlight, optional steerable cruciform canopy from Charly's product designer Tom Grabner has been registered for patent and certified in four sizes.


Do I have to disconnect my glider when opening the DIAMONDcross?

No.
Although if the pilot reacts in a passive way, the DIAMONDcross works perfectly.
The risk of a side slip is very low for a DIAMONDcross. Nevertheless, the glider should be disconnected – if possible – from all rescue systems, no matter whether they are steerable or not. The disconnection can be made by separating the glider from the carabiner, as in this case, an automatic separation system for speed system is absolutely essential. Further opportunities are quick-out carabiners or cutting off the main lines by means of a jack knife.
With the Finsterwalder Quick-Out carabiners, the disconnection is very simple.
As you can't make general statements about how the glider reacts after rescue deployment and every rescue system is always influenced by the residual resistance of the glider, a complete disconnection of the glider can only be an advantage – also if a disconnection is not absolutely necessary for the DIAMONDcross.